Thanks Regina! This years Jukebox Mania raised over $36,000! 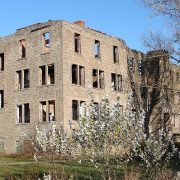 This post is an interview with FSR staff member Renee Hoffart, who researched Intergenerational Trauma stemming from Canada’s Indian Residential School System as part of her master’s studies. Renee is preparing this work for publication. A full copy of her thesis paper can be accessed here.

Why did you decide on this topic for your thesis?

It was actually through work. I had been talking to a lot of my Aboriginal clients and I had called one of my clients about a very serious incident that had happened and I said, “How are you doing? How have things been since then?” and she said, “Oh it’s fine, it’s nothing, we’re already back together. This is normal for me. This is just what is to be expected from a relationship.” And so, I thought that was interesting, and I guess I’ve always been interested in the residential school system and the impacts of that. So I did some research and looked at whether there was any existing research on the impact of the residential school system and that normalization of violence. When I discovered that there was a lack of that, I decided that would be a good area to insert myself into.

What is meant by Intergenerational Trauma?

The definition that I used in my research was that intergenerational trauma is the effect of an initial trauma on subsequent generations of that individual’s family or community. So with particular respect to the Aboriginal population in Saskatchewan we see the effects of that manifested in addiction, violence, gangs, and in all of those things, trauma is continually affecting each generation. I think the biggest piece of that is in terms of parenting practices, because when the children were removed from the home, they didn’t have that experience of, first of all, being parented by their own parents and they didn’t have role models of what that looked like in the home, so they were ultimately left without those skills going forward for their own children and their own parenting practices.

For anyone who is unaware, could you give a brief history of Residential Schools and the impact they had?

So the residential school system came together based on agreements between various churches and the government. They basically set up these schools to assimilate Aboriginal children to the white culture of  Canada at that time. So children were taken from their homes and they were placed in these schools. I had some participants talk to me about how it was a positive experience — they got to have a routine, they learned a lot in the residential schools – but for the most part lots of people talked to me about the abuses  (physical, sexual, emotional abuses) that happened in the residential school system. The RSS was actually in operation until 1996. The last school closed in Punnichy. At that point, they were not being operated as they traditionally were when they first started up, but they were in operation for a lot longer than most people realize. Eventually, the government pulled out of the agreement, so it was the responsibility of the churches to maintain the operation of the schools and, of course, without the funding and the backing of the government, those schools eventually just ended up closing. At that point, when it wasn’t mandatory according to the government anymore, they got rid of things such as the pass system, and made amendments to those systems, that’s when it kind of disintegrated.

I didn’t anticipate being affected by them as much as I was, just because working here, you hear a lot of sad and traumatic things. But listening to people talk about how they were personally victimized by someone at a residential school, talking about the pain associated with being ripped away from their families and then hearing them talk about the effects today . . . it was really, really sad. To hear how the Canadian government had established a system that has affected so many people in a negative way . . . it was huge.

Did you find out anything that surprised you?

What came up a lot – and what I had thought would come up was – they had talked a lot about an unwillingness to talk about their experience at the residential school and with their parents as well. So I knew that would come up in some capacity, but it was across the board — every participant talked about how no one is willing to talk about this issue and also to see the connection between their experience and what they are going through at this point today.

So you mean no one in the family is willing to talk about it or no one outside?

No one in the family, so the people that had personally experienced it. And a lot of them said that hesitancy came from the fact that it was just such a hard thing to talk about for them. They also talked a lot about pretending. Pretending that everything is okay and really trying to put on a brave face in the community or for their kids even though they were so, so impacted by what had happened. One participant advised that her mom really struggled with the abuse that happened in the residential school and that she used alcohol and drugs to cope with that, but her mom was so good at putting on a face of being the head of the family that she didn’t even know that her mom was using alcohol and drugs to mask that pain until she was an adult and some of that stuff came out.

What was the most memorable thing that you heard in your research?

I guess for me it was really cool to be able to hear the participants say,  “The reason I came to do this interview with you is because it’s a really important topic and I want to help . . . I want to help women and I want to get this story out because it’s really important.” And so for them to say that and also to say how proud they were that they were able to come. To also say, “I know I rescheduled my appointment with you five, six times but I’m so glad that I’m here and I’m so glad that I talked about this.” That was cool! Because I think when I had started out it was: I need these participants to do this research project to get my masters degree, and I think at the end it was: I wrote this thesis but it was writing their stories and that was the most important thing for me, is that document really reflected their perspectives and what they wanted to say and what they wanted to get out. It’s a cool opportunity to be able to do that. 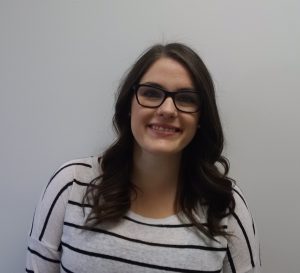 Renee Hoffart joined the Domestic Violence team at Family Service Regina in 2012. She has provided information and support to many, many people affected by domestic violence. Her passion for research has led her to pursue doctoral studies at University of Manitoba.

How can we respond to Intergenerational Trauma?

I think the biggest thing for myself and my own practice is understanding that there is a cycle of domestic violence for these ladies but it fits into the larger cycle of intergenerational trauma and violence that they’re experiencing – with their family, with their partner and systemically as well. So it’s working with people to help them understand that those behaviours are not normal and not commonplace. It’s supporting them in that way because I think that’s the biggest barrier sometimes is that they don’t . . . not that they don’t realize those behaviours are abusive but that they think that’s okay, that’s the way things have always been and will continue to be.

It would be interesting to see if there could be some kind of group that could address how that larger cycle – the colonial context – is affecting the way people are viewing their situation. Because I do think it’s different than a person who has not had that experience – when it’s an isolated incident and their life hasn’t been filled with violence. I think it would be interesting to see a group that could address that need and address that intergenerational cycle.

The systems that are in place now are sometimes affected by the colonial system and attitudes toward Aboriginal people, so people working within those systems should be mindful of how their own attitudes are influenced by the history of colonization in Canada.

This site uses cookies. By continuing to browse the site, you are agreeing to our use of cookies.

We may request cookies to be set on your device. We use cookies to let us know when you visit our websites, how you interact with us, to enrich your user experience, and to customize your relationship with our website.

Click on the different category headings to find out more. You can also change some of your preferences. Note that blocking some types of cookies may impact your experience on our websites and the services we are able to offer.

These cookies are strictly necessary to provide you with services available through our website and to use some of its features.

Because these cookies are strictly necessary to deliver the website, you cannot refuse them without impacting how our site functions. You can block or delete them by changing your browser settings and force blocking all cookies on this website.

These cookies collect information that is used either in aggregate form to help us understand how our website is being used or how effective our marketing campaigns are, or to help us customize our website and application for you in order to enhance your experience.

If you do not want that we track your visist to our site you can disable tracking in your browser here:

We also use different external services like Google Webfonts, Google Maps and external Video providers. Since these providers may collect personal data like your IP address we allow you to block them here. Please be aware that this might heavily reduce the functionality and appearance of our site. Changes will take effect once you reload the page.